The company “Injector Service” was founded in 2000 by Vladimir Postolovsky who is a former graduate of the Military Institute of Radio Electronics and a radar systems specialist.

At that time, digital storage oscilloscopes were very expensive and usually based on a full size bench top computer with additional hardware. Analog oscilloscopes tended to be bulky. The analog oscilloscopes had no easy way to store and replay waveforms and were therefore of limited use as for automotive diagnostics. Vladimir Postolovsky saw a need and together with a group of developers started development of a small, reliable, and affordable oscilloscope designed primarily for automotive diagnostics with high quality signal display and processing.

In 2002 testing of the first oscilloscope units started. These units were called USB Autoscopes and take advantage of the USB bus.

One of the major differences between the Autoscope and similar devices is frameless (uninterrupted) recording and displaying of the signal information. The volume of the recorded information is  limited only by the amount of free disk space of the Laptop or PC used as the host machine.

The software that was developed in conjunction with the hardware allows to work with various very powerful scripts. These scripts have the unique feature of making it possible to perform automated, in depth, signals analysis.

In the spring of 2004 the first device was put into production and went on sale under the brand name USB Autoscope.

The first version of the USB Autoscope oscilloscope. 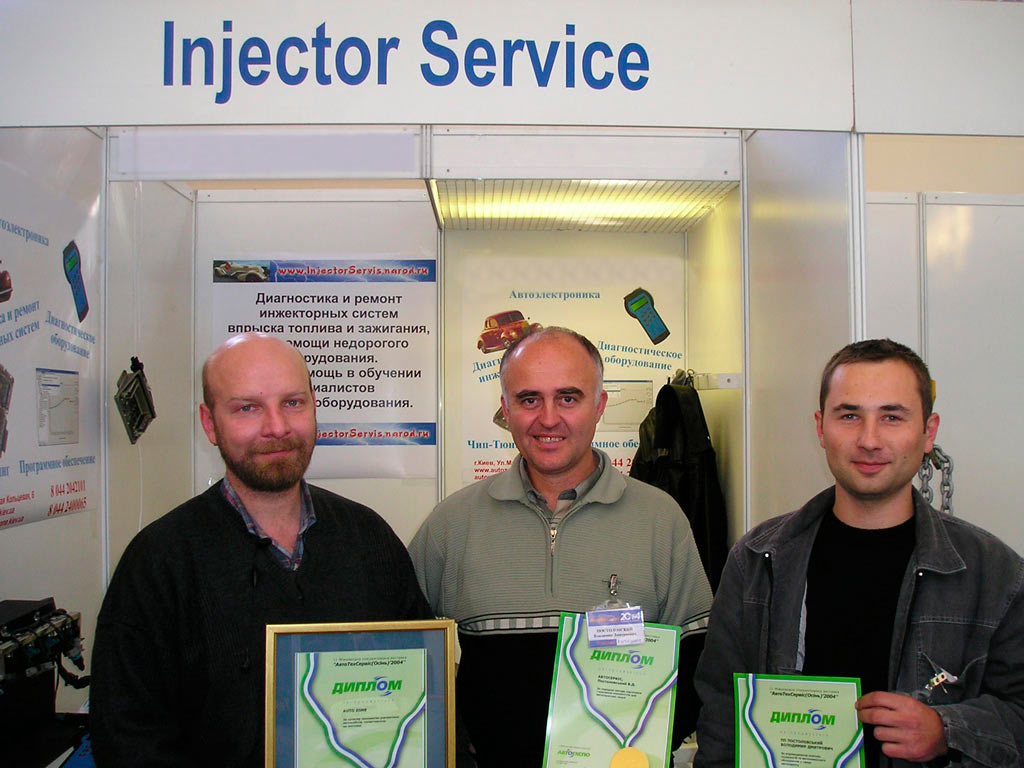 In the fall of 2004, the Injector Service company participated in the automotive exhibition “Auto Tech Service 2004” in Kiev. The company was awarded a diploma at this exhibition for development of advanced automotive diagnostic equipment technologies.

In the summer of 2005 the USB Autoscope I, which is an 8 channel oscilloscope with engine analyzer functions, was released.

The sampling frequency of the USB Autoscope I is 250 kHz and the oscilloscope has a 12 bit ADC (Analog to Digital Converter) while many other small oscilloscopes still used 8 bit ADCs.

In the same year an agreement about publication of articles about the usage of the USB Autoscope oscilloscopes in the automotive magazine “Auto Master” was reached. Over the next 10 years of collaboration over 100 original articles has been published. 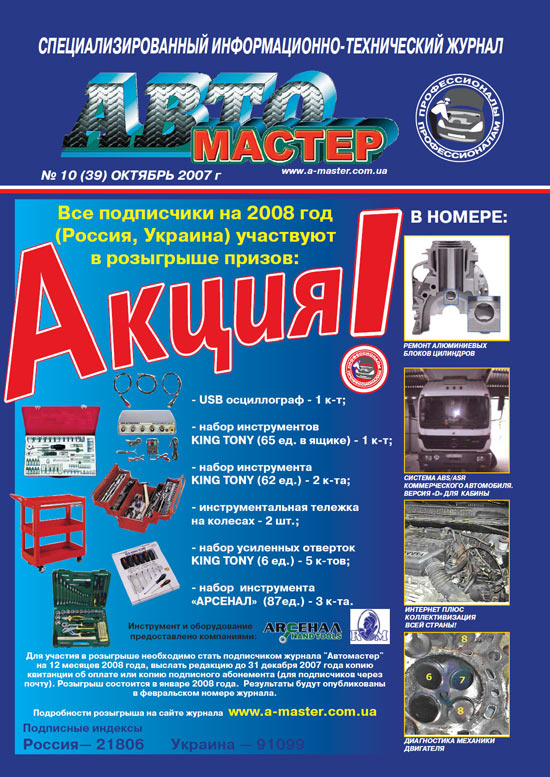 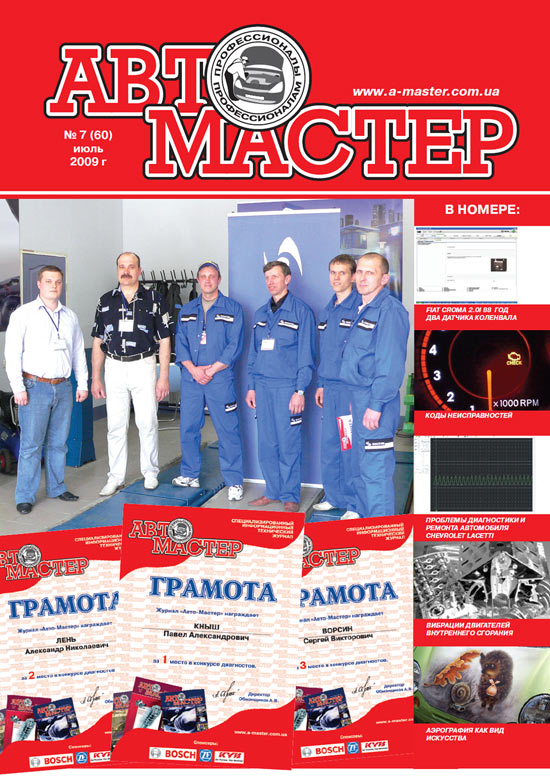 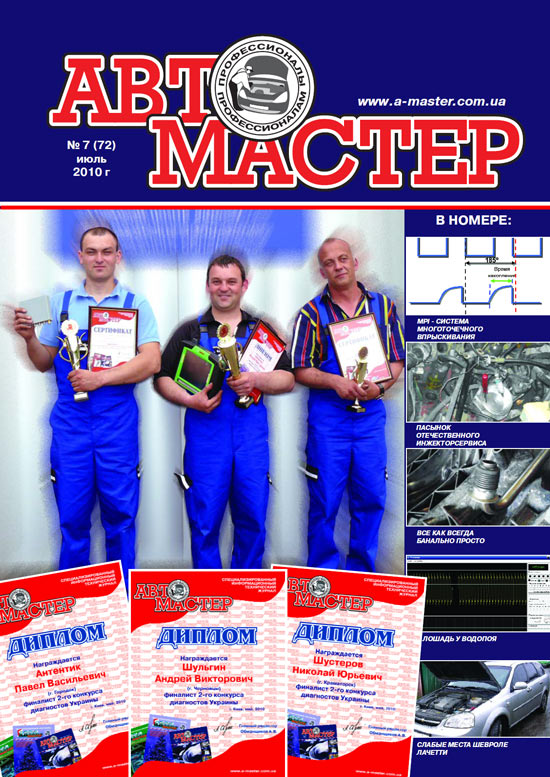 In 2006, at the exhibition “Moscow International Motor Show 2006” was presented a new model of an oscilloscope, the USB Autoscope II, which is equipped with galvanic isolation of the USB bus.

Using galvanic isolation increases noise immunity and electrical protection both for the device itself, and for the computer to which it is connected. The sampling rate was also increased, to 500 kHz.

21 to 22 May, 2008 the Injector Service company together with the Auto Master magazine organized a meet of diagnosticians from CIS countries in Kiev. 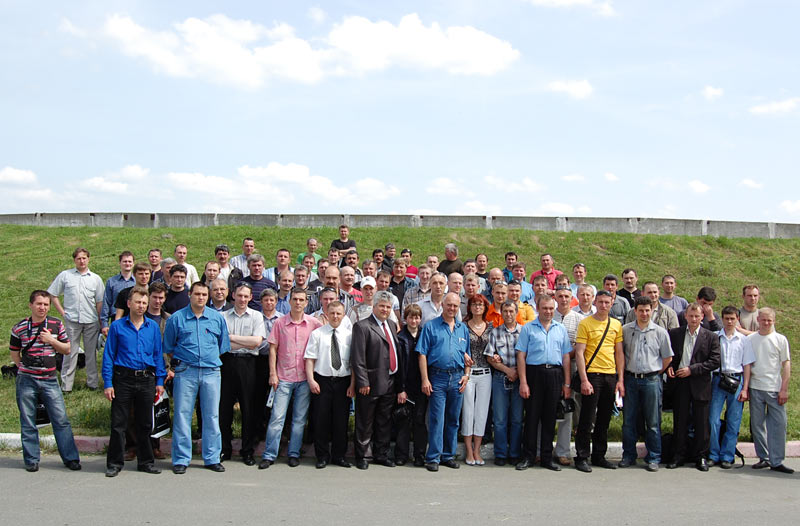 In the summer of 2008 a new model of the oscilloscope, the USB Autoscope III was released.

This model is an 8-channel oscilloscope with a sampling frequency of 12.5 MHz, 12-bit ADC and galvanically isolated USB bus.

In 2009 the “Association of workshop and tuning specialists” organisation was created and the first diagnostician competition was held.

The winner of this competition, Andrew Shulgin introduced the Px script, which he had created himself for the USB Autoscope devices. The Px script automatically analyzes the recorded cylinder pressure waveforms of the gasoline engine and calculates the compression ratio, cylinder fill loss, valve timing, ignition timing characteristics, cylinder fill, and exhaust system restriction. 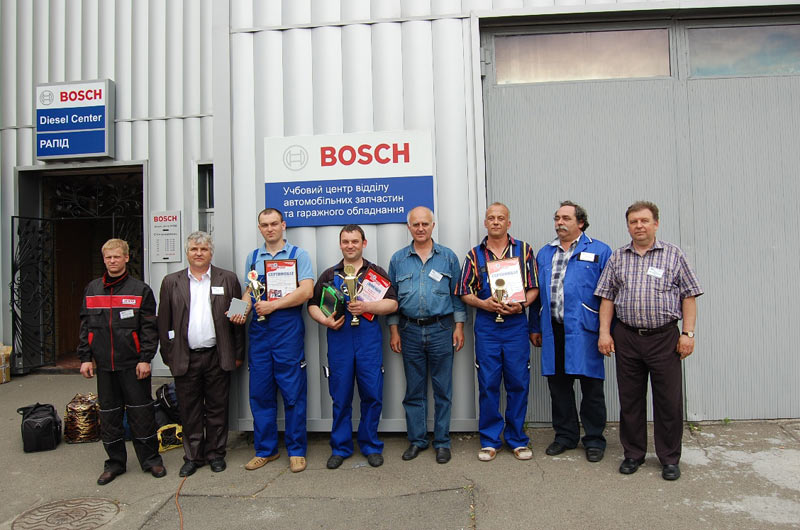 27 to 29 May 2010 the Injector Service company together with the magazine Auto Master magazine organizes the third meet of diagnosticians in Kiev, where the current probe CTi, designed specially for measuring of small currents, is presented. 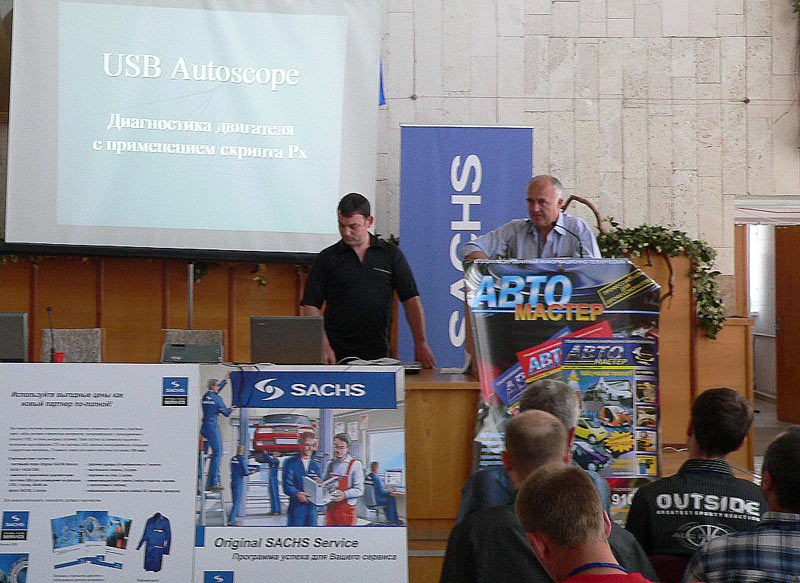 In the fall of 2010 Andrew Shulgin presents the CSS script, which automatically analyzes the signal from the crankshaft sensor and evaluates the dynamic compression of each engine cylinder, identifies faults in the ignition system, assess the condition of the fuel injectors. Additionally the script allows for obtaining characteristics of the ignition timing subsystem, including reluctor signatures. The script can also find damaged and missing reluctor teeth.
In 2011 a laser equipped optical sensor was released. This sensor is used with the CSS script on engines that are not equipped with a crankshaft position sensor.

In 2012 Andrew Shulgin gives advanced classes in Kiev on the topic “The practice of diagnosis and repair of the injector engines control systems. Standard and non-standard approach”. 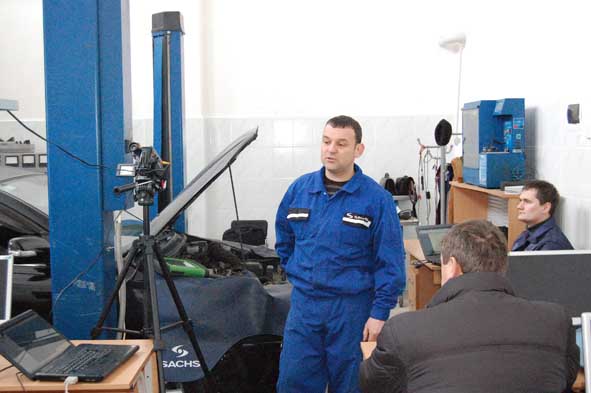 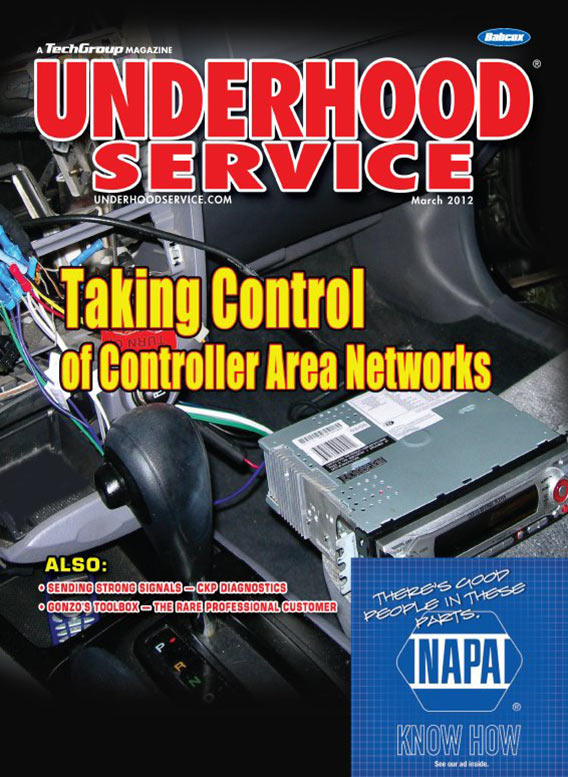 In the February issue of the American “Underhood Service” magazine the article “Service Solutions: The ‘CKP’ Script” was published.

Alexey Pakhomov is preparing a series of training videos on how to work with the USB Autoscope devices and Andrew Shulgin’s scripts for automotive diagnostics.

There are currently 18 video tutorials available. 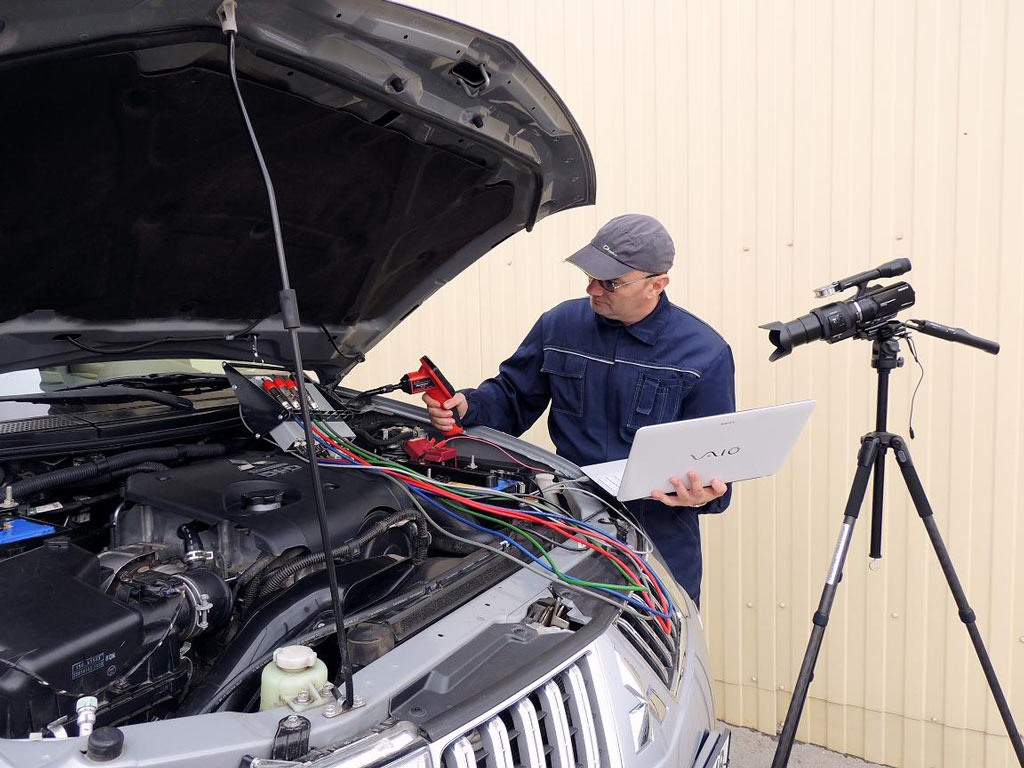 In 2013 in the American automotive magazine “TechShop” a series of articles written by Andrew Bezhanov and named “Unconventional diagnostic methods” were published. 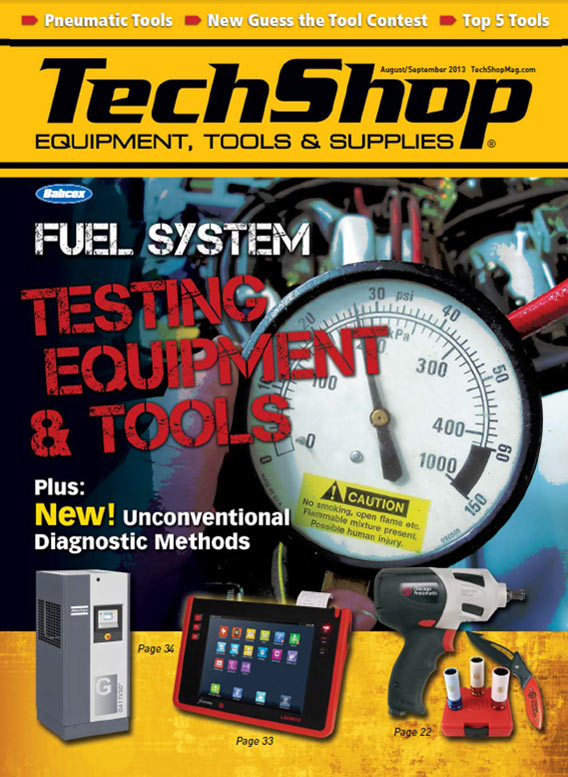 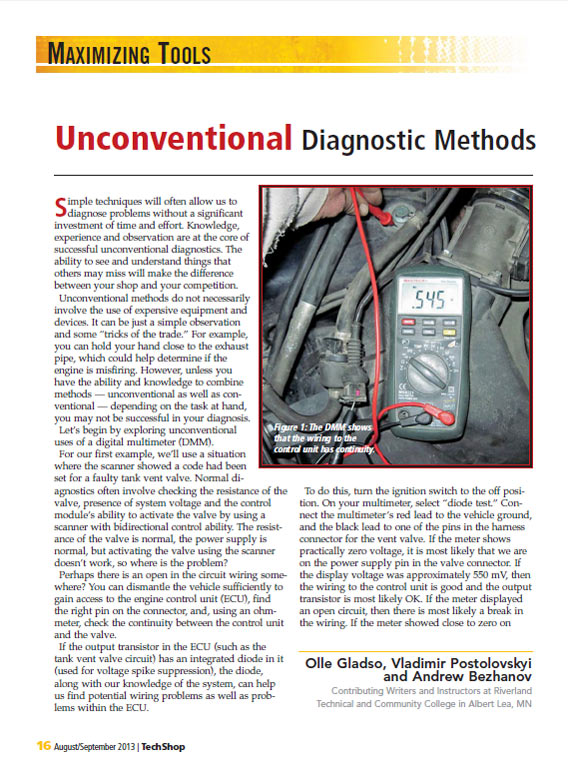 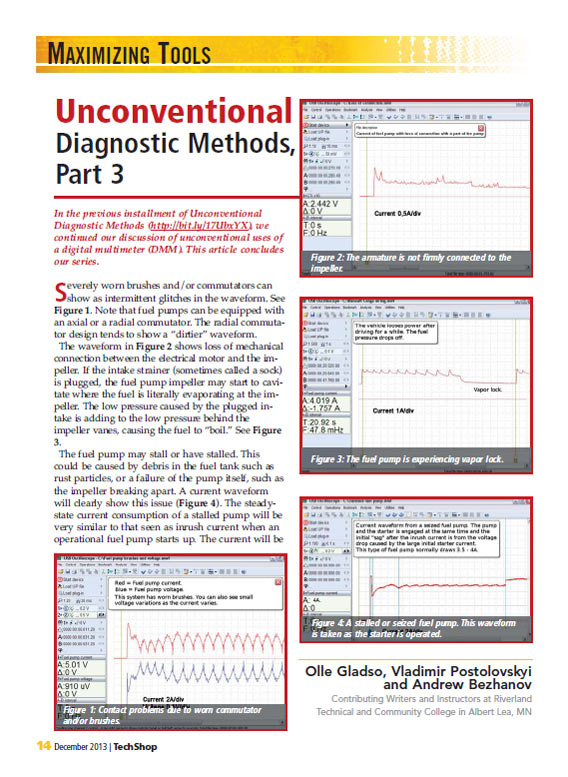 In the fall of 2013 production of the USB Autoscope IV started.

The main differences are: 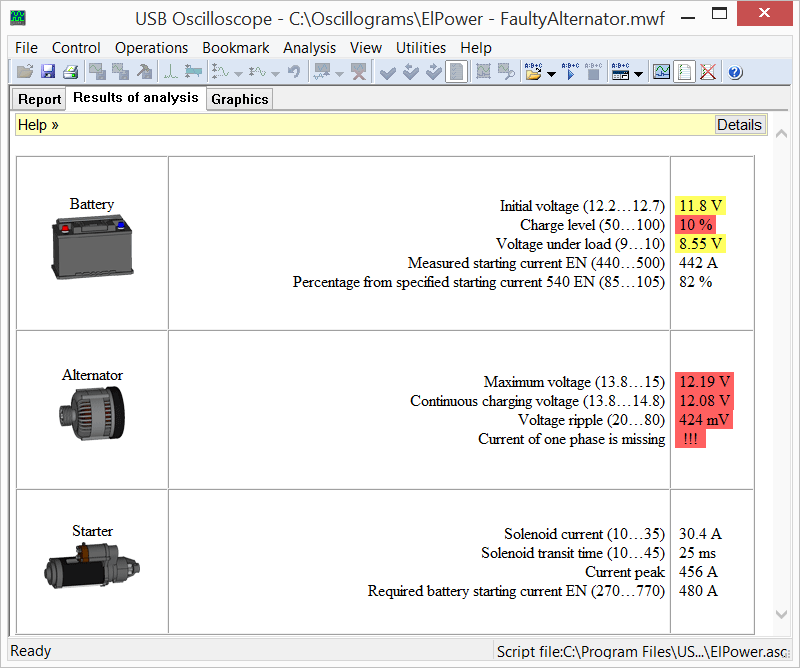 At the same time an updated version of USB Oscilloscope software, with a new script called the “ElPower script” was released.

This script is used to obtain a comprehensive understanding of the condition of the engine starting and charging system. As a result of an analysis of the current waveform produced using a current clamp, the script produces detailed information about the state of the battery, starter, alternator, as well as other high‑power electric vehicle consumers.

In 2014 in the American “TechShop” magazine a series of articles titled “Analyzing the cylinder pressure waveform from a running engine” was published. 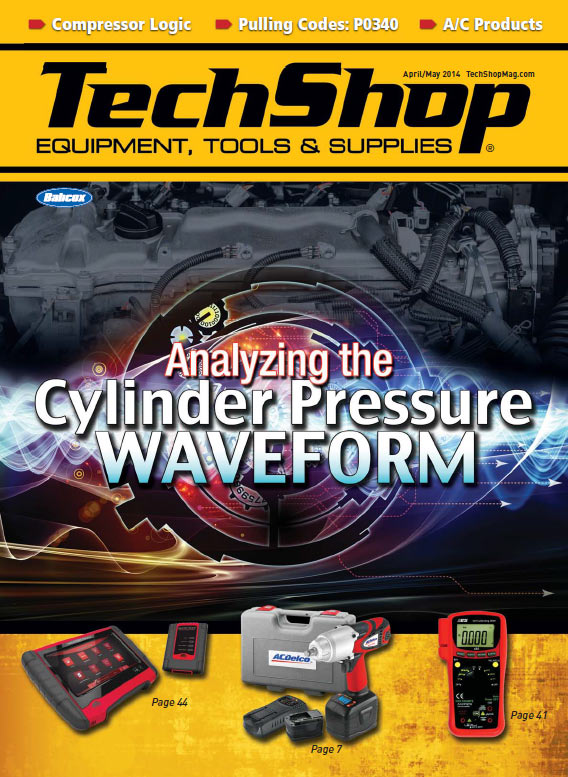 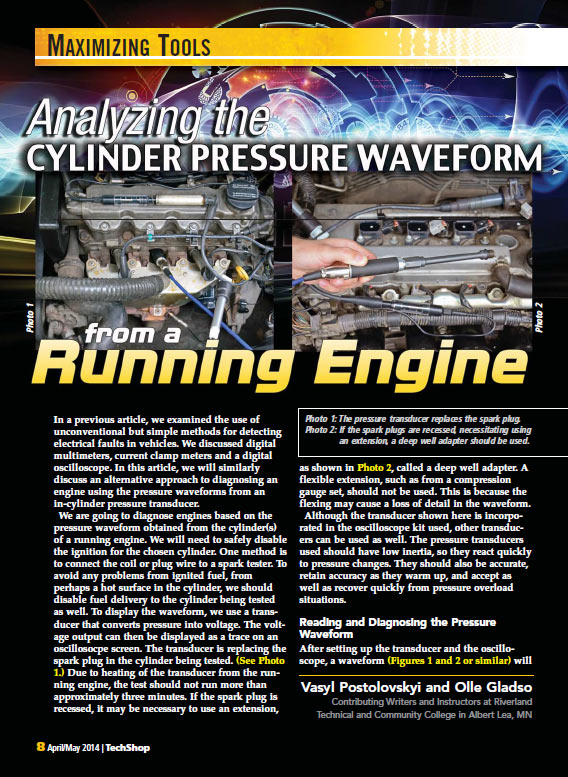 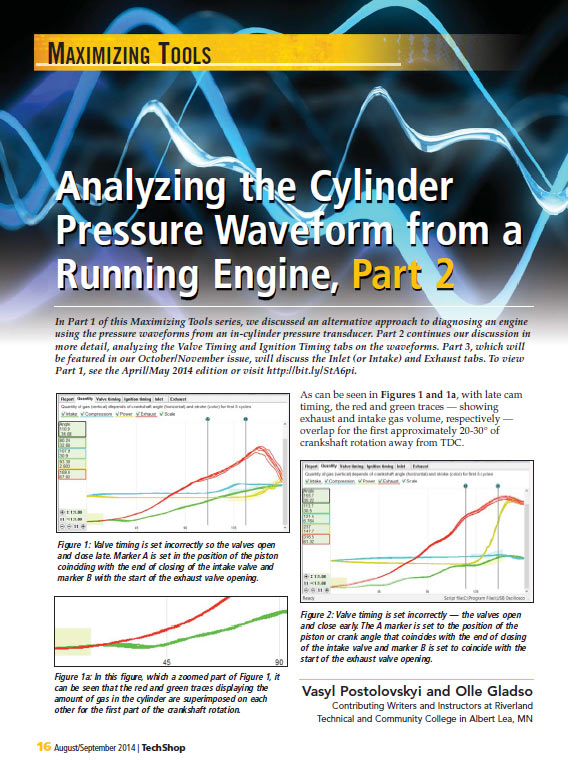 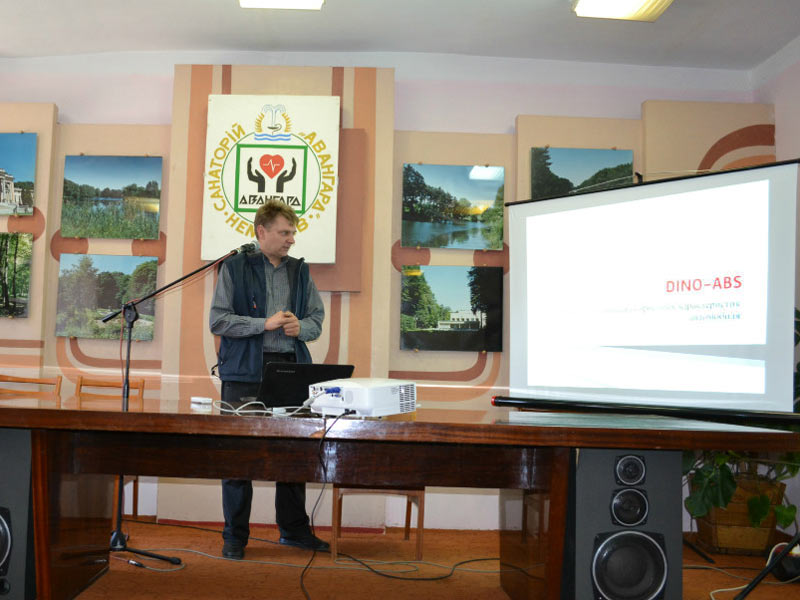 In 2014 Vladimir Kyzyma introduced a script called Dyno-ABS. This script is designed for measuring of the external speed characteristics of the engine (power and torque).

On December 10th, 2014 a subsidiary company, called AUTOSCOPE s.r.o was founded in Slovakia.

AUTOSCOPE s.r.o. is a distributor of products in the European Union.

In 2015 in TechShop magazine the following articles were published:

The Right Diagnostic Tools Can Save You From Extensive -and Expensive- Disassembly Time – February / March 2015. 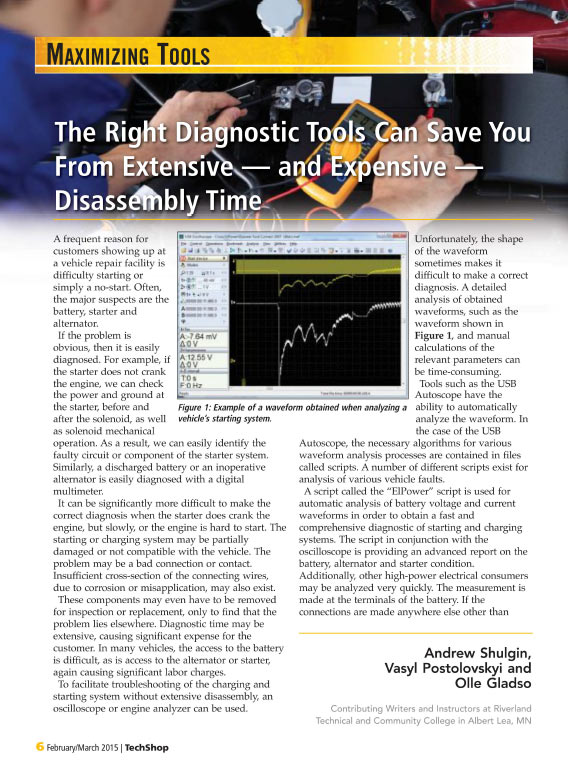 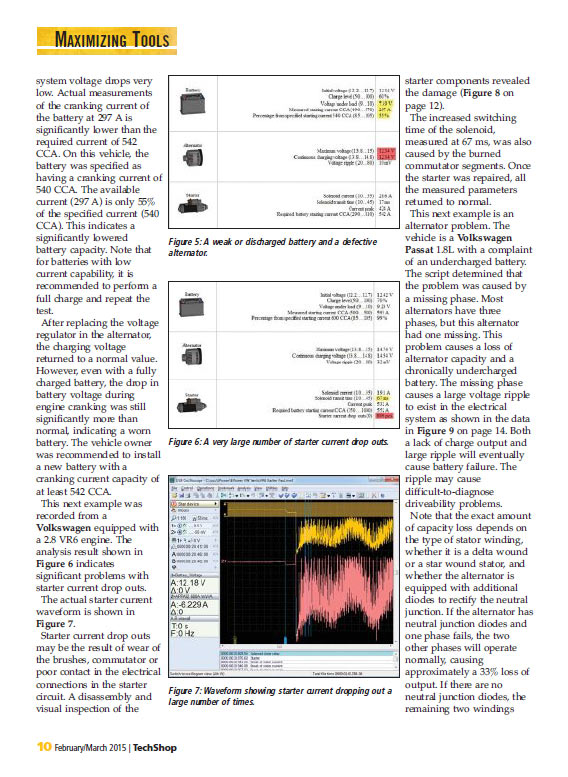 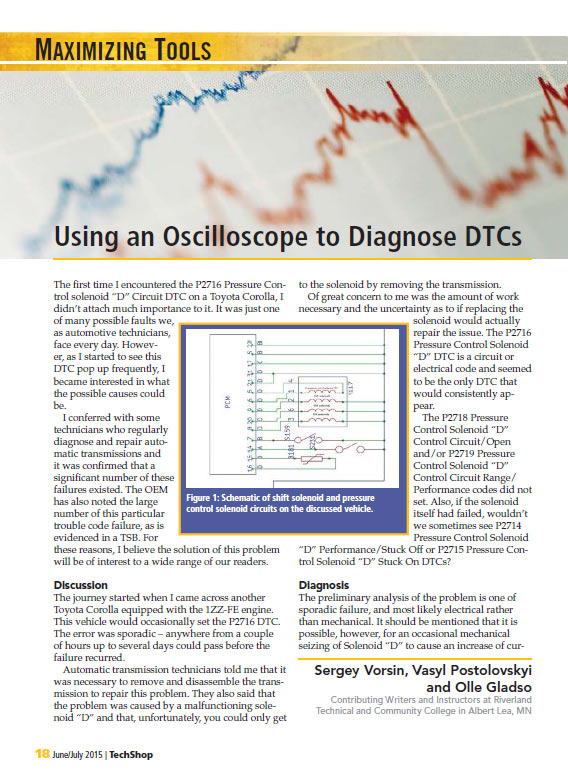 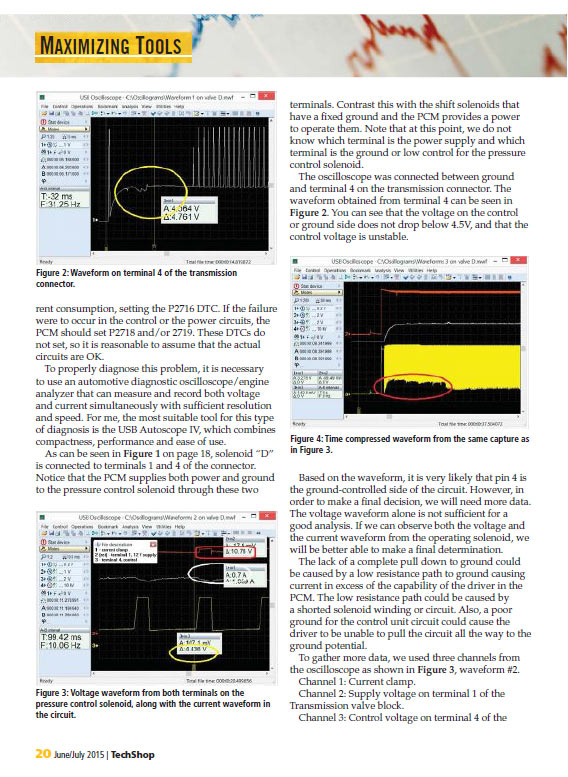 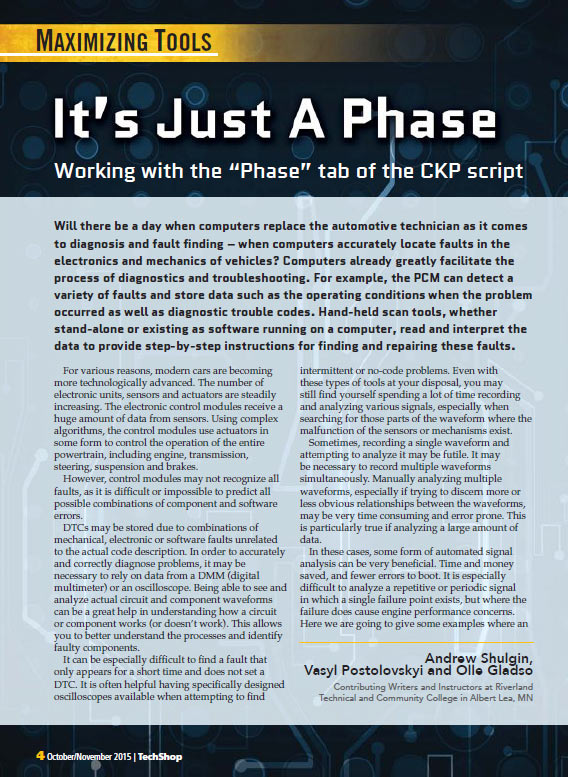 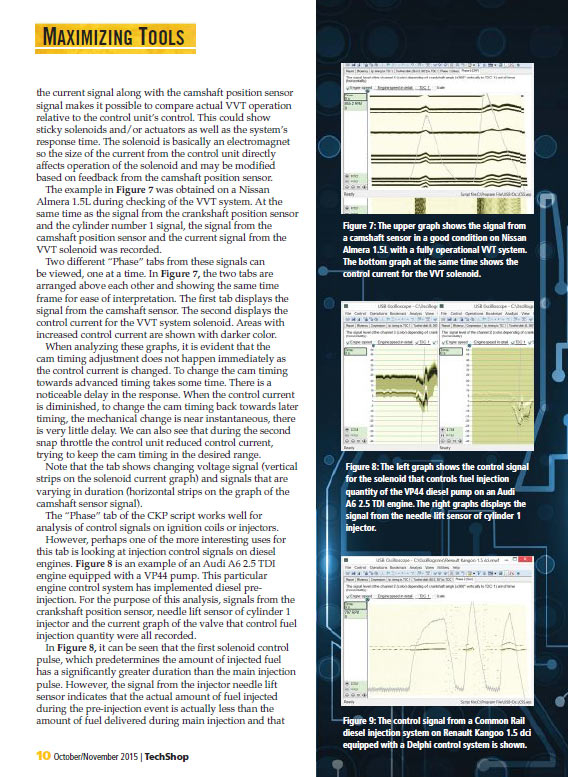 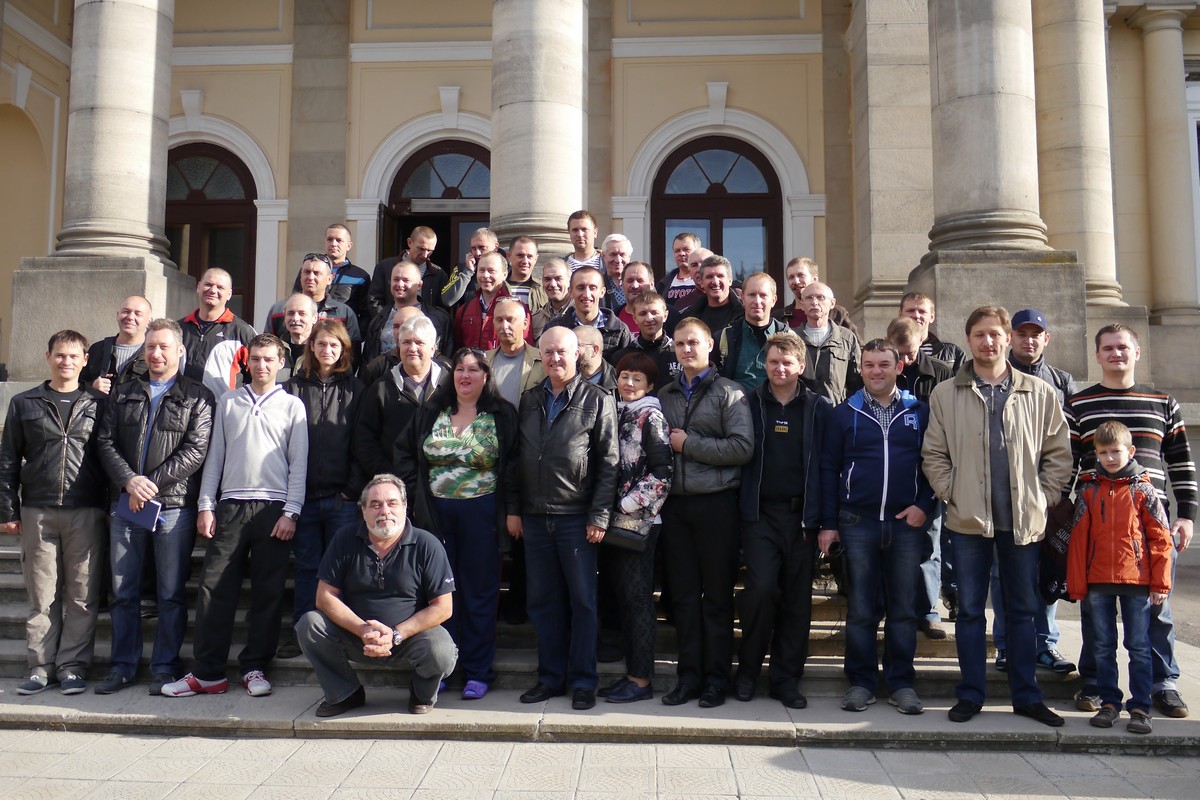 In 2016 in TechShop magazine the following articles were published: 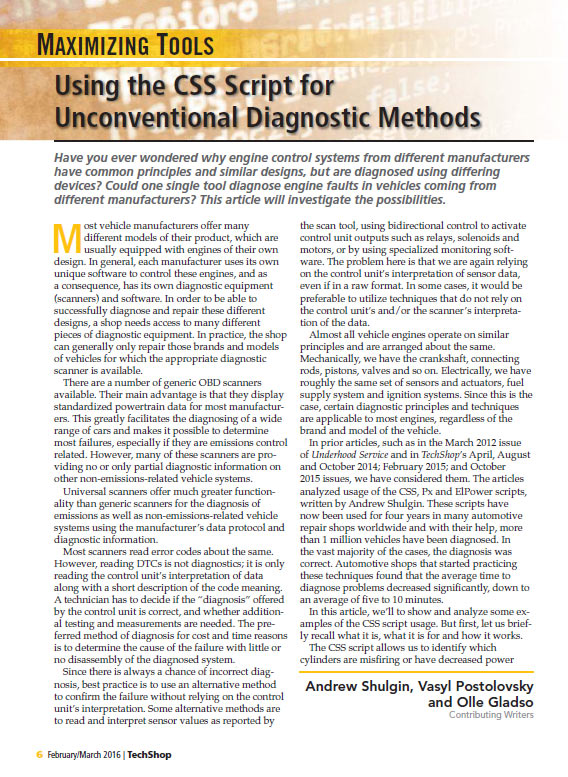 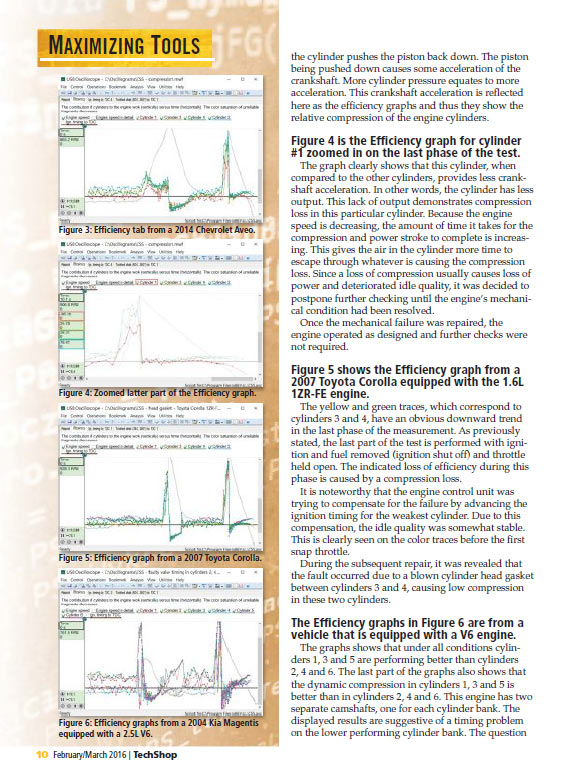 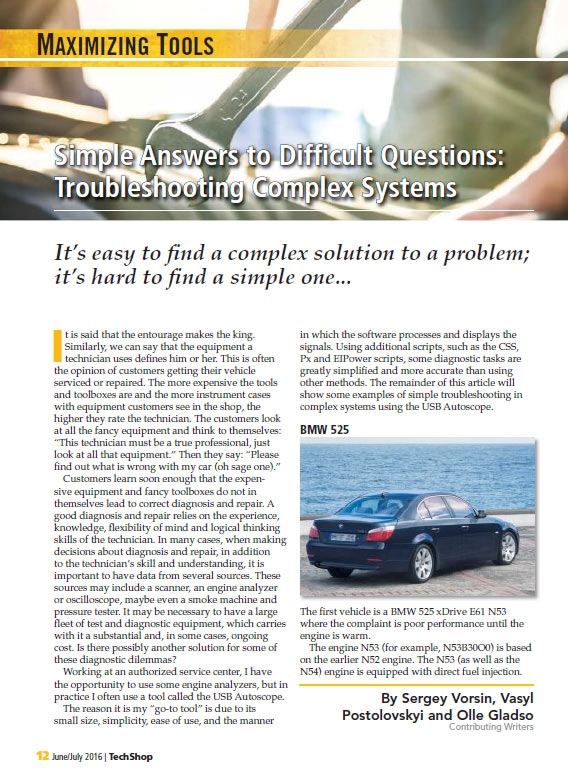 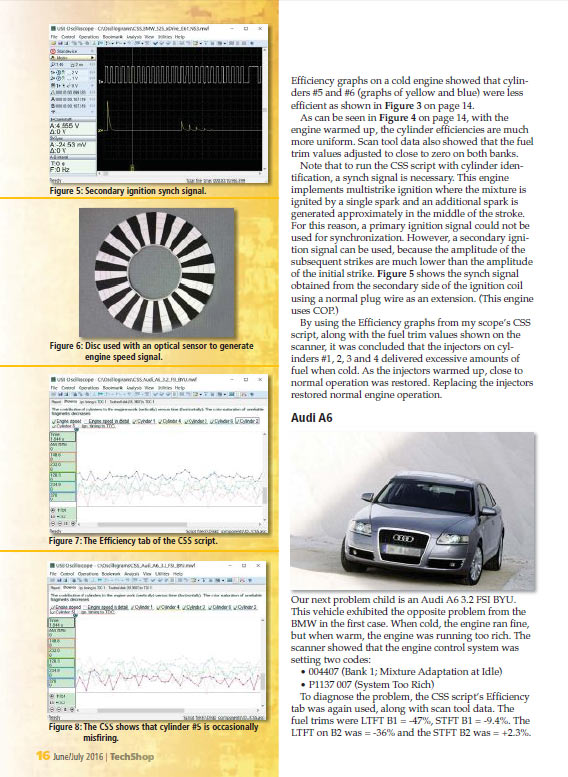